The Raaf Amberley Pipes & Drums, had humble beginnings, as a detatchment of serving RAAF members, performing as a pipe and drum corps to The Amberley Brass band in the early nineties. The intial founding members were: Bob Sistek - Pipe Major, Mick Craik - piper, Rob Thomas - side and Paul Bailey - Base. This first pipe and drum corp played mainly at base parades, mess functions and occaisional civil functions, often as a result of Bob's close personal ties with a local highland dance school. 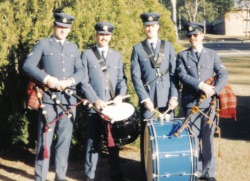 In these early days, we played in RAAF "blues" for military parades, and a motley collection of our own personal gear for civil functions.

We managed quite a good sound on some of these early engagements, all things considered, and had a lot of fun into the bargain. Here, Rob Thomas and Mick Craik play for a Christmas in July function at The Cloak & Dagger Restaraunt in 1994. 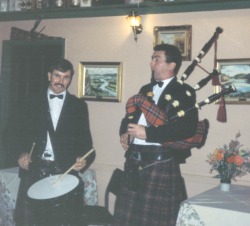 In the late nineties, the fledgling band lost Rob Thomas who returned to his home in WA, But around the same time, we gained two new members. Firstly Lewis MacLennan joined the band, and later Darren Evans. "Macca" proved to be quite a driving force for the band, securing RAAF Welfare funding for new uniforms in the form of Hunting MacInnes kilts and the blue RAAF shirts. He was also instrumental in the bands first major transformation. As the new millenium arrived, the collapse of a local Brisbane band resulted in an enormous influx of civilian members, and Mal Edwards taking over the role of Pipe Major which had been left vacant when Bob Sistek retired from the service. 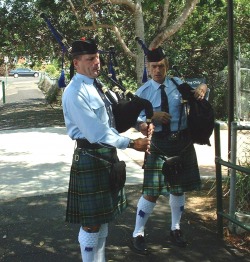 Sun 8 Oct 2000: Lewis "Macca" MacLennan, replendant in the new uniform, gets "the look" from the new boss, Mal Edwards. The event was Ipswich Artist's Day, and the band tuned up next to the old Ipswich RSL.